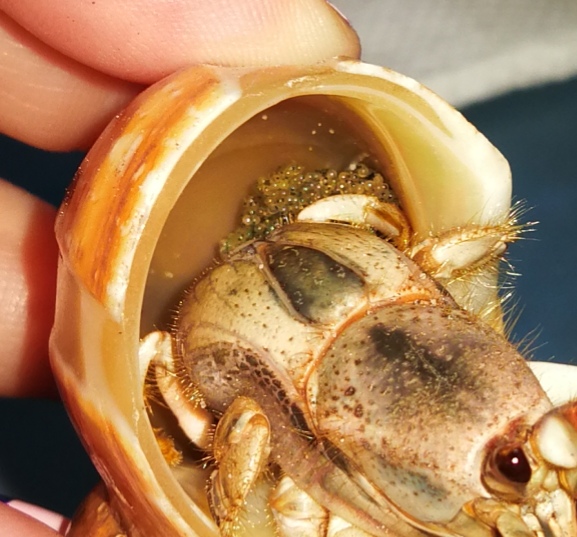 Healthy hermit crabs will molt and grow in captivity. They will even mate and produce eggs, however raising those eggs to be land dwelling hermit crabs is incredibly challenging.

Despite what pet store employees tell you, no one who is currently selling hermit crabs is breeding and raising their own stock. A few hobbyists are working hard to master the process with increasing successes. The most successful to date (to our knowledge) is Mary Akers with 200+ captive bred babies born fall 2018. Most successful referring to the large number of survivors. Many others have been successful but with less over all survivors.

The first to raise captive hermit crabs (outside of a research lab) is Stu Wools-Cobb (Australia) and he generously shared the details of his process so that others could try captive breeding as well.

Mating in the Coenobita family occurs after the female molts.

In the wild, mating season is May-November, with some species having longer or shorter seasons depending on geographical location,  and that seems to apply to captive hermit crabs as well. The ideal temperature range for mating is 82.4F/28C. Environmental temperature plays a role in mating and spawning as well as the lunar cycle.

The males will compete to mate with the female, with the dominant male guarding her from other males until she is ready to mate.  Hermit crab guarding behavior can be seen at All Things Crabby. The female may not be receptive to mating even though a male is guarding her. In some Coenobita species, other males may attempt to force the female to drop her eggs early so he can mate with her.

Mating occurs while still in the shell but with both bodies extended. The male hermit crab rolls the female on the back of her shell and gently rocks her shells and strokes her legs. The female extends far enough so that the male can place his gonopores and on her gonopores, then extending his spermataphore.

The eggs are beleived to be fertilized externally as they are extruded. Extrusion of hermit crab eggs can be seen at All Things Crabby. The female will carry her eggs until they are mature enough to spawn, typically 3-4 weeks, physiological and ecological factors will play a role in the duration of incubation. The female crab releases her eggs in or near the ocean where they hatch on contact with the ocean water.

The zoea will progress through several molt stages over the next month. The number of stages and the length of time spent in each stage differs between Coenobita species with Coenobita variabilis metamorphosing to a true crab the fastest. Explore all the different hermit crab larval stages by species at Coenobita Species.com

To replicate this in captivity you will need a Kriesel set up to mimic the ocean tide pool zone. Frequent feedings and water changes are needed to maintain the proper environment. Zoea are fed nannochloropsis, Marine Snow, decapsulated brine shrimp, live Artemia .A transition tank will be needed for the Megalopa to land as well as some incredibly tiny gastropod shells. 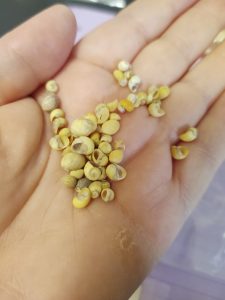 Hello. My name is Vanessa Pike-Russell. Stu Wools-Cobb visited my website on land hermit crab care
and emailed me after reading my care sheet on gender and reproduction. At the time it had been unheard
of for land hermit crabs to have successfully reproduced in captivity and the resulting eggs raised to
juvenile (air-breathing) stage of development.

A few emails, phone calls later, and Stu sent me a copy of his booklet that was created in part for his
local aquarist society. Through his extensive background in breeding fish and raising brine shrimp he
was able to raise the hermit crab zoea with the materials he had on hand (see pages 10-12) and fed them
a diet rich in nutrients similar to those they would have access to in the inter tidal pools of the wild. A
steady routine of hand-feeding every two hours contributed to his success – and it is his desire to share
his knowledge and success with other land hermit crab enthusiasts with the hope that others will obtain
similar results.

Before you view this document, you are asked to be very mindful that it is for personal viewing only. Do not sell, re-sell, publish or distribute this booklet for commercial purposes. Any plagiarism of content contained within this booklet may result in legal action. All work remains the sole intellectual property of Stu Wools-Cobb and should not be used in any way without permission.

Stu Wools-Cobb has given written permission for Vanessa Pike-Russell of About Land Hermit Crabs
(www.aboutlandhermitcrabs and http://users.tpg.com.au/vanessap/ ) permission to share this
information on her personal site and on the magazine The Crab Street Journal of which she is a
producer and webmaster. Any other use of this material is considered in breach of this agreement so
please be very mindful of the terms on which it is shared.

A Method of Keeping and Breeding Land Hermit Crabs by Stu Wools-Cobb who has successfully bred and raised land hermit crab within his home.

A hermit crab that is gravid (carrying eggs) will look like the drawing by Alcock, below. “A female crab attaches her eggs to the fine setae on her pleopods using a glue like substance.” (Fox, S. 2000)

Helfman (1997a) described the copulatory behaviour of B. latro from observation of a single event. Both male and female crabs were in intermolt phase during copulation. The male approaches the female slowly, clasps the dorsal meri of the chelipeds, and quickly moves forward to turn the female onto her back. Abdomens are extended, the male deposits the spermataphore, and the pair disengages.

The copulatory behaviour of other coenobitids apparently lasts much longer than for Birgus. Hazlett(1966) and De Wilde (1973) depicted the migration and reproductive behaviours of Coenobita clypeatus, but no copulatory activity was recorded. Observations of mating of C. clypeatus in the field, confirmed by the presence of a spermataphore on the female, have been made (S. Gilchrist, unpub). Initiation begins by the male grasping the aperture of the female’s shell and moving her shell from side to side. A series of rocking and tapping motions either stimulates the female to extend from the shell, in which case mating proceeds ventral to ventral, or the female retracts father into the shell and the male releases the shell. Page and Willason (1982) noted copulatory behaviour in C. perlatus. Mating occurs during migration to the sea proceeding larval release. Mating is ventral to ventral with both crabs about three-quarters out of their shells. Males pass the spermataphore to the females using the modified pereiopods. Mating may occur before release of the developed egg mass.”

Ovigerous females may be taking shelter at other points along this beach showing a cryptic habit during daylight and active at night as C compressus, a common occurrence observed among ovigerous females of crustaceans; Particularly for C. scaevola and other coenobitids showed either daily or season migrations depending upon rainfall. Also, spawning females of C. clypeatus presented unusual pattern since they did not enter the water, but move toward the sea at low tide to drop or fling their eggs onto the wet rocks. (Shell utilization by the land hermit crab Coenobita scaevola from Wadi El-Gemal, Red Sea by Salam WS, Mantellato FL & Hanafy MH)

Here is a video of Stacy Griffith’s Coenobita clypeatus mating in August 2018:

Here is a video of Stacy Griffith’s Coenobita brevimanus mating in May 2018:

Here is a video compilation from a hermit crab owner whose crabs mated:

You can find more of her hermit crab videos on YouTube

Hazlett, B.A., 1966. Social behavior of the Paguridae and Diogenidae of Curaçao. Studies on the Fauna of Curaçao and other Caribbean Islands, 23: pp.1-143

Harvey, A. Text from a personal email to Vanessa Pike-Russell from Alan Harvey regarding determining the gender of a land hermit crab. Shared with permission. For more information about Alan Harvey and his research, please visit the link below
http://www.bio.gasou.edu/bio-home/harvey/research.html 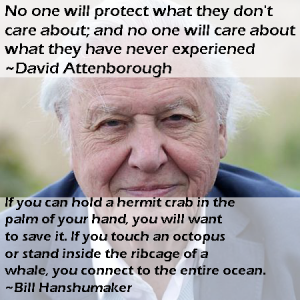 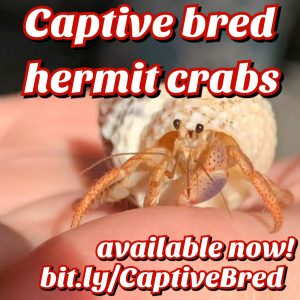 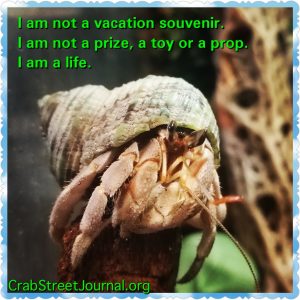 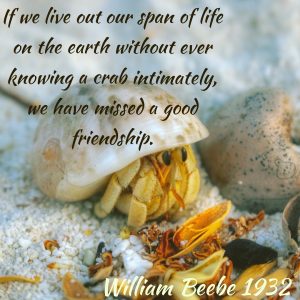